Hat tip to Nordiska Psalmodikonförbundet (NPsF) and my sister-in-law Marian Edmund-Paulson for telling me about this guy. He plays the psalmodikon with some the drive and rhythm of Swedish folk music, and it reminds me of the Hardanger fiddles I first heard as a student in Oslo. --

A new member of Nordiska Psalmodikonförbundet, the Swedish psalmodikon players' association has posted a YouTube clip, a photo and a SoundCloud audio clip of a kvällsvisa (night song) and a stev (*a simple four-line melody -- see note below) on the psalmodikon to NpSF's Facebook page at:

His name is Gunnar F, and he also plays the nyckelharpa or Swedish keyed fiddle (in fact it appears that it's his primary instrument). And his attack -- the way he hits the downbeat -- gives his playing a lilt, or rhythmic quality, that I'm not used to hearing on the psalmodikon.

It's fascinating, I love hearing it and I want to study it.

So, Gunnar F, if you ever happen to read this: I hope you post more psalmodikon videos to YouTube!

In the meantime, here's his Stev for Psalmodikon on YouTube:

Psalmodikon med Gunnar F. He writes: "Psalmodikon var ett instrument vi växte upp med. Men det var länge sedan …" (trans.: the psalmodikon was an instrument we grew up with. It was a long time ago).

Equally as interesting is a picture that Gunnar F sent the Psalmodikonförbundet. It shows a turn-of-the-century band with a psalmodikon from Jämtland, a district in north central Sweden next to the Norwegian border and not too far east of Trondheim.

It's quite a band! I see a cornet, an accordion, a fiddle, cymbals, what appears to be a small zither (a Finnish kantele, maybe?) and a psalmodikon that's unlike any I've seen before.

The psalmodikon is held by the woman wearing a headscarf, third from the left in the back row of the picture at the right of the page below, which is a screen grab from NPsF's Facebook page. To enlarge it, go to NPsF's Facebook post and click on the picture. (While you're there, BTW, why don't you click on "Like?" They're doing a lot to revive interest in the psalmodikon.) It's the boxy instrument held by the woman in the back row, third from the left, and it's identified in the cutlines as a jämtländskt psalmodikon. It looks like she played it with a standard violin bow. 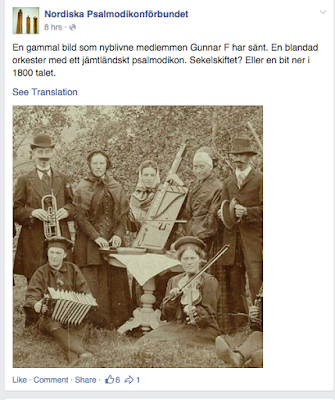 I'll leave it to the experts whether this Jämtland psalmodikon is technically a zither or a lute. (A zither is the word the experts use for any stringed instrument without a neck, and a lute is any instrument with a neck, including but not limited to lutes.). If I had to guess, I'd say it's some kind of hybrid. But I think it's clearly a folk instrument.

And it looks like it has sympathetic strings. The Swedes call them resonanssträngar, and I did a fair amount of research on them when I had my copy made of the Rev. Lars Paul Esbjörn's psalmodikon at the Jenny Lind Chapel museum in Andover. (Pictures are available on the Jenny Lind Chapel website -- click on "Flickr" link and open directory of Psalmodikon pictures.)

As near as I can tell, the psalmodikon in Gunnar F's picture has a melody string stretched from a tuning peg at the top of the neck to a bridge toward the bottom of the soundbox. The fretboard is marked with the same white- and dark-colored pattern of whole steps and half steps as other psalmodikons. I count 12 sympathetic strings or resonanssträngar, stretched over the soundbox. I don't think it would be possible to bow any of them, but if they were tuned to the 12 tones of a chromatic scale, they would vibrate sympathetically in unison with whatever note was being bowed on the melody string.

To sum it up in a word or two, the Jämtland psalmodikon in the picture is musically a sophisticated instrument. And look at the detail in the soundhole carved in the shape of a lyre! This is an instrument that clearly has developed considerably from the simple wooden monochord that Johann Dillner described. I think it became more elaborate, both musically and esthetically, by a folk process.

Tunes: Kvällsvisa and a stev on the Psalmodikon

Gunnar Fredelius' SoundCloud account has an audio file of an evening song (kvällsvisa) and a stev, a simple, ballad-like melody played on the psalmodikon (Kvällsvisa och ett stev på Psalmodikon). He writes:

When I was a kid, the psalmodikon was still a natural, common, instrument in some parts of the country, amongst elderly people. Since then it has almost disappeared and most swedes don´t even know what it is. I found out there is an association, Nordiska Psalmodikonförbundet www.npsalmodikonforbundet.se and through them I could buy me an instrument. The picture is of me and my mother.

The first one is not exactly as my mother wrote it. The other is a so called nystev from southern Norway.

As the directory at https://soundcloud.com/gunnar-fredelius makes clear, Gunnar F is an accomplished nyckelharpa player with a deep interest in the older strains of Scandinavian traditional music. What I've heard of his music is modal and rhythmic, and it reminds me of the traditional Norwegian music I enjoyed so much when I heard it played on the Hardanger fiddle in summer school at the University of Oslo. I suspect that some of the pietist Swedish-American pastors I'm writing about now might not appreciate his music, but I plan to keep coming back to it -- there's a lot I can learn by listening to him.

So, Gunnar F, if you're reading this, please keep posting your music to the internet.

* Footnote. A stev, according to Wikipedia at https://en.wikipedia.org/wiki/Stev, is a simple "folk song consisting of four line lyric stanzas." It's similar to English ballad measure, or the Common Meter of traditional Anglo-American hymnody. I'm most familiar with them in Norwegian folk music, where they're associated with simple melodies called kvedar. Link here for an arrangement of Kirsten Bråten Berg's Min Kvedarlund (my grove, or garden, of kvedar), the title song from her 1993 album of that name), along with some more background on Norwegian stev melodies and kvedar.

Thank you for the kind words!
The old picture is something I stumbled across at the internet. I have been trying to find it again, so that I could give credit for the one who did post it. And perhaps find some information about it

https://soundcloud.com/gunnar-fredelius/sets/psalmodikon At that URL I will probably post some more tunes. I played Psalmodikon a little, as a child. My older relatives in Västrgötland played it and we also had one at home, so it was natural to use it. It is said to be a simple instrument and easy to play. But is it? Yes, if you never have seen it before, you are likely to play some simple tunes after five minutes or less. But so you can at many other instruments. As I see it, it is just as correct to say that it is far from easy to play it, when you try to play other then slow corals and things like that.

Tonight I tried to play a melody my relatives played, a long time ago, a schlager that was very popular before world war two. https://www.youtube.com/watch?v=I5lOwZ4nzR8 As I am so out of practice with this instrument, I simplified it a bit

Thanks again for the kind words
Gunnar F