Natkirken reaches out to unchurched 'seekers' in Copenhagen: 'We shall be shepherds to cats' 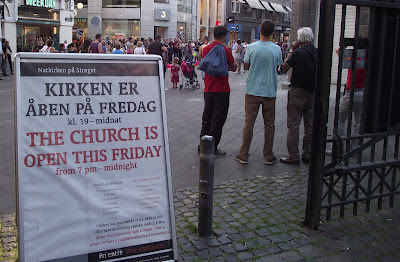 Lask week when Debi and I were in Copenhagen, we were able to attend Natkirken (Night Church) services at Helligaandskirken (Church of the Holy Spirit) on the Strøget and briefly look in on the service briefly at Vor Frue (Our Lady) cathedral in the old university quarter downtown.

The Friday night services we saw were simple, refreshing and sometimes moving, even though we didn't know the language. They have has spread from Denmark, where they originated, to Greyfriars Kirk in Edinburgh, and they could be a useful model for mainline churches in North America that want to do something about declining membership.

Natkirken is a "liturgical laboratory" of the Diocese of Copenhagen. It was initiated by the estabished Church of Denmark in 1999 at Vor Frue and other city parishes in order to reach non-churchgoers in one of Europe's most secular societies. Night church services in the 12 parishes vary from one to the other, but typically they are loosely structured, combining music, prayer and silent meditation. "Many of our visitors can be characterized as 'seekers' ... we must meet them on their own terms," concluded an initial diocesean program evaluation. Judging by what I saw, they do.

In all, it's a significant outreach in a nation where 80 percent of the population claims membership in the Lutheran church but only 2 to 3 percent attend Sunday services. On Friday nights, Night Church proclaims a very old Christian message in the heart of one of Europe’s most cosmopolitan, secular cities. And Helligaandskirken amplifies that message with CDs and social media like Facebook and YouTube.

"While the Sunday service puts the emphasis on the forgiveness of sins, we try at Night Church to preach God’s presence at the center of each human life," night church pastor Mikkel Vale told the diocesan magazine Kirken i København (the church in Copenhagen). "This is partly done by an emphasis on personal prayer in worship. It is important for us Christians to learn that God is alive and present. … God goes with us. Always. I hope we can help to convey that to people, so they too can feel it when they leave the church again."

In another Kirken i København article, Vale uses a striking metaphor. He says, "we postmodern people are both misguided sheep and independent cats" and suggests a new role for the church: "We shall be shepherds to cats."

What we experienced last Friday night in Copenhagen left this cat purring. Why wasn't anybody doing services like this when I was in my 20s and 30s?

Natkirken at Helligaandskirken begins at 7 p.m. with international evensong conducted in English and lasts till midnight, blending musical traditions ranging from Gregorian chant and the Lutheran chorale to the prayerful but very singable meditations of the contemporary Taizé and Iona communities. Last week's evensong was followed by congregational singing of familiar Danish hymns; a recital of medieval chant by Hildegard von Bingen, sung by mezzosoprano Elisabeth Ørsnes; and a lysandagt, or candlelight communion, followed by singing and prayer in the style of the Taizé community in France and a midnight service. 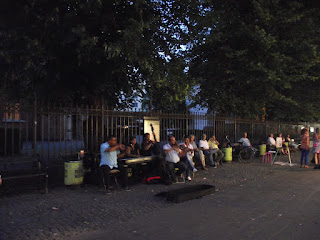 Part of the appeal of Night Church is that worshippers can come and go freely, and at least for us, that was part of the evenin's charm. Outside on the Strøget, a group of busking street musicians played Strauss waltzes and other light classics in the lengthening summer twilight (see picture at left). At times it almost seemed like the scene outside was playing in a kind of counterpoint with the sacred music within the church.

And I thought the contrast, the interplay between what was going on in the church and outside in the city, was utterly charming. The Scandinavians have a word for it -- hyggelig. It's pronounced sort of like "HOOG-ley," and it's usually translated as "cozy" or "comfortable" or "nice," but that doesn't begin to cover all of its meanings. Anyway, it was all hyggelig and I could have stayed there forever.

Inside the church, it seemed like there was a little something for everybody. The congregational singing was attended by 15 or 20 people, mostly middle-aged or older, while the candlelight service attracted a younger crowd. With faint echoes of the street band playing waltzes outside in the background, the celebrants and half the congregation walked down the nave of the church, holding candles and singing a processional hymn in Danish to the Irish tune we recognize in America as "Be Thou My Vision." The Danish words, I found out later, are by Pastor Vale. 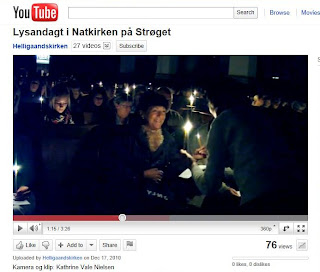 The communion service followed, and the ebb, flow and cadence of the liturgy was wholly familiar even though we didn't speak the language.

(We had a service booklet, too, so we were able to follow along in Danish. We noticed parishoners were asked to hold their candles over the service booklet so they wouldn't drip on the floor. Another good idea to take back to North America!)

In all, it was moving and the familiar liturgy felt inclusive. There's something about candlelight, too, that transcends time, place and language. I wasn't about to pop a flash during the service, but the screen shot at right from Helligaandskirken's YouTube channel shows the same service and conveys some of the atmosphere.

(For another impression, link here to read San Francisco blogger "Mystic Seeker's" account in the early spring of 2007 ... and the comment below it by a hiker who was invited to take part in a communion service in Iceland without knowing the Islandic language.)

"God is a DJ" at Vor Frue. After the light service at Helligaandskirken, we headed back to our hotel on Vesterbrogade by way of Vor Frue. It's in the old university district, just a few blocks from the Strøget, and it has a different approach to Night Church. Vor Frue goes more into poetry, jazz, electronica and other contemporary forms. Taizé meditaion, for example, must take on an added dimension in what a cathedral bulletin describes as "Taizéimprovisationer." I wish I could have heard it. Jazz improv seems a perfect match for Taizé.

According to the bulletin we picked up at the door, Friday night's meditation at Vor Frue was a standing feature called "God is a DJ." It relies on recorded music, and according to the Copenhagen newspaper Politiken, the Friday-night DJ sessions appeal to an inner-city cross-section "from 20-something hipsters to lonely bag ladies."

We weren't there long enough to form a coherent impression, but the part we saw featured a light show to the soundtrack of what we gradually realized was a new age-y cover of "I Wanna Be Sedated" by punk rock icons the Ramones -- the selection wasn't announced, but it was sung in English, and it was probably by the Los Angeles electronica/trance band Superhumanoids. The interplay of lights, music and lyrics was mesmerizing.

Some Danish hymns on the Strøget. During the singing at Helligeaandskirken, which reminded me of the old-fashioned "hymn sings" in small-town American churches when I was growing up, a gentleman in the congregation realized the Americans in the third pew weren't following the numbers as they were called out in Den Danske Salmebog, the words-only hymnal they were using. So as each selection was called out, he came back and whispered the number to us in English.

With his help, I was able to follow the hymn singing fairly well even though most of the hymns -- salmer in Danish -- were new to me. They were Danish, mostly from the 19th and 20th centuries, although a couple of them were recognizable as variants of the old Lutheran chorales. A list follows:

Nikolaj Grundtvig, a prolific writer and educator some of whose work appears in American hymnals (and whose theories are behind the John C. Campbell Folk School in North Carolina), was well represented. As was early 20th-century Danish composer Carl Nielsen. I'm familiar with Nielsen's symphonies, but if I knew before that he wrote hymns, it slipped my mind. But write hymns, he did. I was told by people at Helligaandskirken that his contributions to Danish hymnody are especially beloved, and judging by the two I heard I can understand why.

Here are YouTube video clips of Neilsen's "Tunge, mørke natteskyer" (heavy, dark night clouds) as sung by the Danish Girls Choir of Copenhagen and (embedded below), by Den Danske Salmeduo in concert in 2011:

And an audio clip of the former pop/Christian contemporary band STOEW and a video (embedded below) of the Cantica Ungdomskor (Youth Choir) from Vor Frelsers (Our Savior's) Kirke, in Horsens, Jutland, singing "Min Jesus lad mit hjerte få" (my Jesus, let my heart receive), directed by Kevin Laplante

Finally, here's the official video of the Ramones' original of "I Wanna Be Sedated." I know it's heresy to say this, but I like the cover I heard at Vor Frue's "God is a DJ" meditation better!