So at 12:06 p.m. today I email my paper to Historic Preservation (see conference program here -- I'm one of three presenters in a breakout session on "Immigration and Migration") and get the rest of my life back! The paper is "Quad-City Creoles? Blended European and Anglo-American Musical Traditions in Swedish-American Cultural Institutions, 1848–1925," and that's all I'm going to say about it now. I'm done with it for a while.

One of the things I've been wanting to do while I was struggling with edits and University of Chicago footnote style is to post a hymn I found last month at a "cousins' reunion" in the Catskills. It was sung when my grandfather's church in New York City was organized. 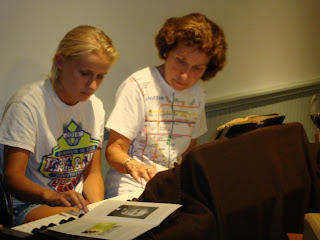 And here, finally, it is.

Our grandfather (bestefar in Norwegian) was the Rev. Johan Peter Ellertsen, of Zion Lutheran Church in Brooklyn. We gathered July 24-27 at the Koinonia retreat center in Highland Lake, N.Y.

We brought memorabilia, and one of the items we shared was a program booklet from Zion's 25th anniversary in 1933. It mentioned a hymn that was sung at the first organizational meeting in 1908. It's called "In Jesus’ Name Our Work Must All Be Done," and it was entirely unfamiliar to me.

Anyway, some of us were gathered around a keyboard going through Bestefar's hymnal (see picture at right above), the 1913 edition of Lutheran Hymnary. So I tracked down in the index of first lines, and asked the folks at the keyboard to play it. 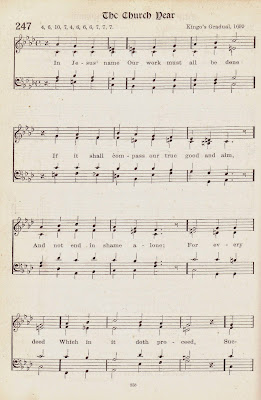 Music seems to run in the family -- Bestefar's father and perhaps his grandfather were cantors in Bergen, and at Koinonia I learned that Bestemor's family, from an industrial town called Sarpsborg in southeastern Norway, claims descent from the Johann Walther who edited Martin Luther's early congregational music.

In fact, later on that weekend we celebrated the family tradition by singing some of Walther's arrangements, including Christ lag in Todesbanden ("Christ Jesus lay in death's strong bands"). But I'm getting ahead of myself.

Back to the hymn from Zion in Brooklyn.

When I heard it played on the keyboard, it sounded minor. (I think it's in F minor from looking at the music, but Hymnary.org says it's in A-flat major. It's written with four flats, anyway, and that's enough to give an amateur 60s-vintage folk musician like me who only plays in D, G and E-minor a serious headache! I'll leave its modality to others to straighten out.) Major or minor, it was serious music. Somber.

"In Jesus’ Name Our Work Must All Be Done" is No. 247 in the 1913 hymnary jointly published by the Norwegian Evangelical Lutheran Synod, Hauge's Synod and the United Norwegian Lutheran Church of America and edited by the noted choral director F. Melius Christiansen, then newly arrived at St. Olaf College.

In Jesus' name
Our work must all be done
If it shall compass our true good and aim,
And not end in shame alone;
For ev'ry deed
Which in it doth proceed,
Success and blessing gains
Till it the goal attains.
Thus we honor God on high
And ourselves are blessed thereby;
Wherein our true good remains. 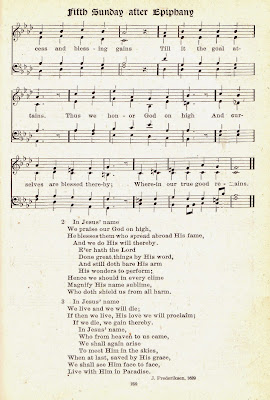 But it is appropriate for the organizational meeting of a new congregation.

The words are by J. Frederiksen (1639) and music from Thomas Kingo's Gradual (1699). I'm not able to find anything on Frederiksen, but Kingo was a 17th-century Danish bishop and hymnwriter who was very influential in the Danish and Norwegian churches down to the 20th century. According to Hymnary.org, the tune name is I JESU NAVN, and it was arranged by 19th-century Norwegian folksong collector and composer Ludvig Lindeman. So it has as good a pedegree as anything in the Norwegian-American tradition.

It's available on line through the Internet Archive at archive.org. But I'm posting JPEG files from Bestefar's hymnal. To enlarge, click on the JPEGs above and at right.

I'm also posting the part about the 1908 meeting from the anniversary program.

Grace and peace! During the summer of 1908, Rev. Johan Ellertsen, upon call from the Home Mission Committee of the Eastern District of the Norwegian Synod of America, made a thorough canvass of South Brooklyn from 19th to 60th Streets and, through the assistance of Rev. C.S.C. Everson, brought about the organization of Zion Norwegian Lutheran Church, of Bay Ridge, at the home of Mr. and Mrs. George Simpson, 430 48th Street, Brooklyn, N.Y. Eighteen men were gathered together on that memorable Tuesday evening, October 26th, 1908. The meeting opened with the singing of “In Jesus’ Name Our Work Must All Be Done,” Scripture reading and prayer. With Rev. C.S.E. Everson presiding the group present declared its willingness to organize themselves into congregation to be known as Zion Norwegian Lutheran Church of Bay Ridge. The present constitution of the Church, with a few minor changes of later date, was then accepted.