CONTENT ADVISORY -- This post wanders all over the place, dragging in stuff from several obscure nooks and crannies of 19th-century Swedish and American hymnody, the history of different box zithers, the deployment of Yankee regiments in Middle Tennessee before the Battle of Chickamauga and other trivia. But that's the way it rolls sometimes, and the hymn I found (or, rather, really noticed for the first time even though I'd seen it before, helps me fit some of the trivialities together. Nice hymn, too.

Found this afternoon, while I was trying to track down an online forum thread on the psalmodikon, a page from the 1846 edition of Johannes Dillner's arrangements of the Svenska Psalmboken in siffernoter for psalmodikon. It wasn't what I was looking for -- my best discoveries come to me that way -- but EverythingDulcimer.com contributor "razyn" posted it in an unrelated thread, "The Tennessee Music Box" (scroll down to 6:15 p.m., Nov. 6, 2008) at http://everythingdulcimer.com/discuss/viewtopic.php?t=17860. The title page is pictured just below at right. 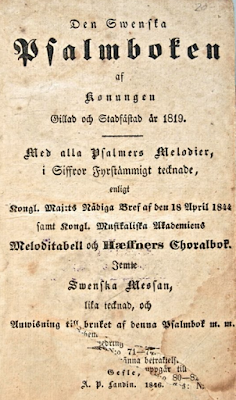 It turned out to be the missing piece in a puzzle. I’ve studied other pages from the 1846 edition, the title page and a couple of excerpts from the introduction, but never had access to the music.

I was glad to find the sifferskrift, which I'd previously overlooked, for two reasons:

The hymn, or psalm in Swedish, is No. 252 in Johan Olof Wallin’s 1819 psalmbook, På Gud och ej på eget råd in Swedish. After puzzling through the siffernoter, comparing it to the musical notation and hearing the melody on Jens Fredborg’s invaluable Swedish hymnody website, I can add a third reason:

Like so many of the Swedish psalms of the 1800s, according to Wikipedia, På Gud och ej på eget råd is Johan Olof Wallin's translation of a German chorale, with words written in 1757 by German hymn-writer Christian Fürchtegott Gellert. The melody was composed by 18th-century German cantor (town musician and choir director) Severus Gastorius. 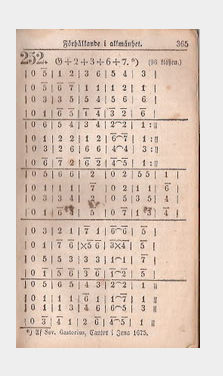 Gastorius' tune, WAS GOTT TUT, became very popular in 17th- and 18th-century Germany, where it was sung to another text. According to Hymnary.org: "Severus Gastorius (1647-1682) was a cantor in Jena, central Germany. ... One of his friends, Samuel Rodigast, wrote the hymn "Was Gott tut, das ist wohlgetan" for Gastorius when he was sick (to cheer him up as Rodigast writes in his dedication). Even before he recovered, Gastorius set it to music based on a melody by Werner Fabricius. The tune became widely known in Germany as the cantor students of Jena cantor[ei] sang it every week at Gastorius' door as well as when they returned home."

Translated from the German as "What God Ordains Is Always Good," it is in the LC-MS Lutheran Service Book (2006, No. 760), and has appeared in a number of German-language Lutheran, Reformed and Mennonite hymnals. In Germany the chorale was arranged by Pachelbel and Bach. Catherine Winkworth's translation was "Whate’er my God ordains is right."

I've had copies of a manuscript notebook of siffernoter in Esbjörn's handwriting in the Esbjörn Family Papers at Augustana College, but I've not been able to relate all of the tablature to hymns in the 1819 psalmbook. This hymn compares well with my copy of the 1892 Chicago edition of the Svenska Psalm-Boken, however, and I believe (crossing my fingers and knocking on wood) it'll help me figure out how he handled four-part harmony. 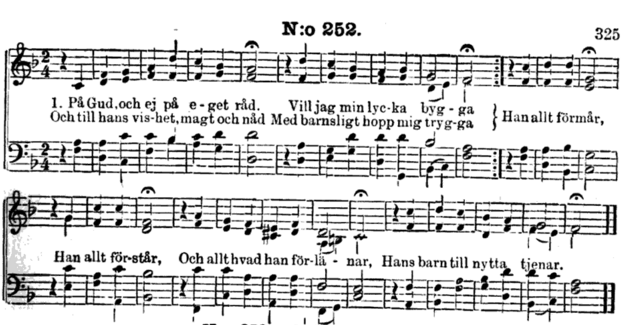 Here, by way of background, is what I wrote in my notes for a workship I called "Pastor Esbjorn’s Singing School" at the 155th anniversary celebration of the Augustana Lutheran Synod, Andover, Ill., April 25, 2015:

Later, as a professor at a Lutheran college in Springfield that was a forerunner of Augustana seminary in Chicago and Rock Island, he taught hymns – they were called psalms in the old country – to the Scandinavian students. “Both for edification and for practice, services with Swedish or Norwegian sermons and simultaneous singing out of both hymnals, using, the same melody, have been held every Sunday afternoon, likewise one evening each week a so-called prayer meeting,” he reported in 1859. We have other evidence as well. In the L.P. Esbjorn Family Papers at Augustana College, we have two undated notebooks of psalmodikon tablature, or siffernoter (numerical notation) of Swedish psalms and Anglo-American hymns in Esbjorn’s hand. They are housed with a grade report on students at the seminary in Chicago and several pages excised from The Hallelujah, a tunebook by Lowell Mason, an influential educator and composer of hymn tunes from Boston. One of the tunes Esbjorn tabbed out for psalmodikon is from a Norwegian psalmbook of the day, and I believe that suggests he used the notebook in Springfield or Chicago, where he had both Swedish and Norwegian students.

Two handmade notebooks containing siffernoter are included in the Esbjorn Family Papers in Special Collections at Augustana College. One contains Swedish and Anglo-American hymns in four-part harmony. The other, which I have not yet analyzed in detail, appears to consist of harmony parts for hymns from Olof Wallin’s Svenska Psalmbok of 1819, among them “A Mighty Fortress is our God” and several German chorales and Swedish psalms. Included in the first manuscript are four-part arrangements of Gustavus Adolphus’ Krigspsalmen (“Be not dismayed, O little flock”) and Hosianna, a beloved Advent and Palm Sunday anthem that did not appear in the 1819 psalmbook, along with music from collections by Peder Håkansson Syréen and other Swedish spiritual songsters. But the bulk of Esbjorn’s manuscript consists of Anglo-American hymns including Old Hundred, Pleyel’s Hymn and Lowell Mason’s Missionary Hymn (“From Greenland’s icy mountains”). Two hymns are attributed to a “Lutheran Hymnbook,” and no less than four to Lowell Mason’s Hallelujah. In all Esbjorn’s notebooks suggest a keen interest in American hymnody. [Footnotes omitted. Following common American practice, I used the English alphabet is spelling Esbjörn's name.]

The other thread I was chasing, typically, had nothing to do with the hymn I found.

It was in a thread on how the psalmodikon might have influenced a box-shaped American dulcimer called the "Tennessee music box" during the Civil War. Rayzn, a.k.a. Richard Hulan, a folklorist with whom I share several interests, posted a page from the 1846 psalmbook with instructions, in Swedish, on how to build a psalmodikon and suggested "[a] theoretical Union soldier might have left behind his hymn book (easier to carry, and to lose, than a psalmodikon). But it's unlikely that a Tennessean who found it would get much out of these instructions."

The page of instructions, a sharper copy of which Hulan graciously sent me several years ago, is copied to Hogfiddle in a 2012 post where I translated it when I was getting specifications for a psalmodikon in the Steeple Building museum in Bishop Hill, (permalink http://hogfiddle.blogspot.com/2012/09/psalmodikon-in-steeple-building-at.html). But what especially interested me was a linked Swedish psalm, in siffernoter at http://s197.photobucket.com/user/razyn_photo/media/WasGotttutdasistwohlgetan.jpg.html. It's No. 252 in Wallin's 1819 psalmbook.

I've long been skeptical about these supposed links between the psalmodikon and the American dulcimer -- see for example my July 11, 2010 Hogfiddle post "Swedes on Cumberland Gap?" (permalink http://hogfiddle.blogspot.com/2010/07/swedes-on-cumberland-gap.html) -- but Hulan knows more about both instruments than I do. He cites a Minnesota cavalry battalion, including "at least five Norwegian-born soldiers," that served in Middle Tennessee in 1862 and 1863. "Any of the above might have had a psalmodikon, and might have left it (or the idea of it) in the area in which -- as far as we know -- the TMB [Tennessee music box] form arose almost immediately after the Civil War," he adds.

Hulan also says, "There may also have been Swedes in the unit; my source only tracked Norwegian Americans." He's careful not to claim too much, noting that the strongest evidence for some influence is organological -- i.e. based on the similar boxy shape of the two instruments. He concludes only, "I have no evidence that these specific Norwegians carried a psalmodikon to the Tennessee Valley. But there ARE several documented soldiers from the psalmodikon-using population who were stationed, at length, in the most relevant part of the Tennessee Valley during 1862 and 1863."

I'm still skeptical, but I don't want to rule it out altogether.

I addressed these issues before in my 2010 post, when an instrument builder from New York state named Nils R. Caspersson hypothesized that Swedes around Cumberland Gap, Tenn.-Va.-Ky., might have had psalmodikons, and I still have the same questions.

While you can't prove a negative, I located Caspersson's "Swedes" (who were probably descended Scottish-English borderers named Sweeten) just north of Chattanooga. But they were in dulcimer country, so you can't entirely rule it out. By the same token, could a psalmodikon-totin' Norwegian Lutheran of the 3rd Brigade, 2nd Division, Cavalry Corps, Army of the Cumberland, have met up with a "damsel with a dulcimer" between the battles of Murfreesboro and Chickamauga and compared musical notes? I still don't think it's very likely, but I guess it's not beyond the realm of possiblity.

See? I warned you this was going to wander all over the place. The Swedish psalm is nice, though, and I want to learn it on my psalmodikon. The Bach cantata is especially nice, too.